Round 2: Saibra, Doctor Who Companions Debate

LET’S FIGHT ABOUT IT!

A: going to your list, you’d put Saibra (1 episode) over Rory/Danny/Martha

J: absolutely! she is USEFUL

A: Saibra has the POTENTIAL to be a great companion, but she hasn’t proven herself yet

A: she’s useful for ONE episode, in which her contribution to the heist is just part of a larger plot with a lot of other useful people

A: and she doesn’t even want her powers

J: She’s almost too perfect as a companion 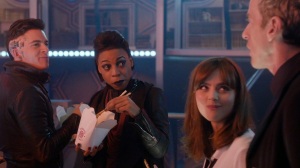 A:  But she hasn’t had a chance yet to show how she would work with the Doctor

A: it’s still HIS show, and a great companion is in their relation to keeping him in check/complementing him

J: well your logic is disqualifying ALL one-episode companions, not Saibra specifically

J: she doesn’t let him steamroll her, which is fantastic

J: pushover companions are the worst (and the most dangerous)

J: she comes back into a dangerous situation to save him & clara

A: I’ve only seen the episode once, I don’t remember how she interacts with the doctor specifically well enough

A: didn’t the hacker guy come back too, though? He was cool and super useful. Like a male Oswin, with less flirting

J: he was cool too, almost made the list

J: but he’s a modded human so who’s to say he’s any more useful than any OTHER modded human

A:  I’m not arguing that she’s not useful, brave, skilled, and could be a great companion, but she hasn’t weathered enough emotional storms yet to show she has enough range to stand up to the other folks who have done more

J:  think that episode had a LITERAL storm for them to weather

A:  it was a single heist, though, she didn’t have to watch loved ones die or decide whether it’s worth it to save a single life or a whole world

A: we haven’t seen her in a moment of moral gray decisions

J: she think she’s killing herself with the shredder, i think it took a lot to do that

J: I hear that your point is that she was only in one episode and so we only get SO MUCH time with her

A: I want her to come back

J: my point is that time, however little, shows her to be a PHENOMENAL companion

A:  Which means we won’t get her as a companion since she’s TOO useful — look as Oswin, to make her into a companion they took away all of her most useful skills and capabilities. And even when they teased that modern Clara was going to have great tech skills (after the download), they never used it again.

J: i mean i know it’s a scifi show but some things are just TOO unbelievable

A: I realize that it does strain credibility