A: he saved the world

J: it’s like buffy, that ain’t even special anymore

A: Danny Pink was the MAN, instantly lovable, really great tactical skills, stood up to the Doctor (way more than any version of Clara ever has), and he GETS it

A: he GETS why the Doctor is so dangerous and, unlike Rory who knows and then still ambles after Amy, tries to STOP it

J:I do like Danny – he’s not my favorite but i get why he made your top 5

J: the ONE THING that i dont like about him is that he tries (in his nice, not-overbearing way) to tell Clara what she can do with her life

J: which is off-putting for me

J: besides that he’s a DELIGHT

A:  he tells Clara that he can’t be with her if she keeps doing x, which is completely fair. If a guy is doing hard drugs, I can still love him, but inform him that if he doesn’t stop doing hard drugs (or go to rehab and try to kick it, in which case I will be as supportive as fuck), then I can’t stay in that relationships

J: that’s why i said he did it in his nice, not-overbearing way

J: like he didn’t throw a lamp at her head and scream. but just that LEETLE bit of arrogance of “I know better than you”

J she has the same information

J shit, she has MORE information

A I’d argue it’s not telling her how to live her life, it’s more like an ultimatum: pick your priorities–me or the Doctor

A but he has a better perspective than her

J it’s so mild though

J he has a different perspective, but she KNOWS – it’s not like she’s sitting there going “oh gosh, i had no idea”

A a very conscious addiction ar

A where she really knows that it’s bad and she’s risking her relationship with the man she loves, but she can’t give it up, and then lies about it

A in the same way that a smoker knows it’s a bad idea, but keeps doing it anyway for the rush

J yeah i get all that, it’s just a SCOOTCH mansplainey

J but besides that whole thing

A yes, very important, something that neither Rose nor Martha could get the hang of

A I still think they’ll bring him back somehow

J well they’ve brought him back in robot form

J i HOPE they bring him back

J but i fear they’ve blown that load

A yeah, maybe- but death hasn’t stopped a lot of characters from coming back for almost no reason. Hello Master.

J so annoying, that dude(ette)

A That guy has got to stop having so many death scenes, they’re just not believable any more

A: I want danny pink cyberman to still be around somehow. in some form, just to use the actor

A: even if they have someone evil using his form for something dastardly, would LOVE me some evil Danny Pink

J: i donno like he really seems to dislike being evil 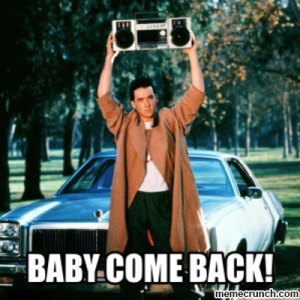